Regardless of what we hear on progressive news channels dedicated police officers around the country selflessly go above and beyond the call of duty, committing random acts of kindness daily.

Most of the time, these random acts of kindness are seldom acknowledged except for those grateful seniors who were fortunate enough to encounter a stranger in uniform coming to their aid in a time of need.

I’ve taken the liberty of selecting three of those selfless acts by police officers; however I could have chosen thousands.

Off-duty Police Officer Rafael Rodriguez had just finished an 8-hour shift and was heading home in is own private auto for some much needed sleep. However, he came upon an elderly man standing alongside the deserted road next to his vehicle, indicating that there was something wrong. Perhaps his auto had broken-down.

The dedicated police officer exhausted from a full day of policing could have easily passed the elderly gentlemen by. However, he chose to stop and render assistance.

Deputy Rodriguez works @ So County Jail in #Frostproof. He stopped to help a stranded motorist on his way home from a long 12-hr shift. He's today's #AmbassadorOfGoodwill. We're so proud of him & our 1,000 other deputies. Read the full story on our FB pg https://t.co/GwkLID6JsA pic.twitter.com/xonHwKflIV

The Good Samaritan, still in uniform, stopped and asked the elderly motorist what was wrong. He didn’t know, only that his car wouldn’t start. Rodriguez quickly popped the hood and after a few minutes determined that the car battery was dead.

Rodriguez then bundled the elderly motorist into his own car and drove him to a nearby auto store where he purchased a battery. Then the selfless police officer drove to his own house picked up tools and returned to the broken-down auto to install the battery.

This amazing story would have gone unnoticed if it wasn’t for a passerby who stopped and recorded the entire encounter on her phone. The woman sent the story to the Polk County Sheriff’s Department Facebook page where she gave a quote saying that Rodriguez was an “awesome man.”

On Thursday, July 12th 2018, City of Moss Police Department in Mississippi received a distressful 911 emergency call from a distraught elderly woman about a burst water pipe in her home.

When the three police officers arrived at the home early Thursday morning, they found the hysterical woman still in her nightgown outside her home crying.

The police officers quickly turned off the main water valve to the house and asked shift supervisor Sgt. Lancen Shipman if they could stay and help clean up the mess for the elderly woman whose husband was in the hospital recovering from surgery. Shipman without hesitation agreed it was the right thing to do.

“I just grabbed her and hugged her and told her we were going to take care of it,” Shipman said.

However, before the clean-up began the three went to Lowe’s for parts and fixed the plumbing.

“We’ve got it all on body cam,” he said, because it was all in the line of duty.

Chief Brandon Ashley said the woman had no one to turn to and called dispatch. “They cut the water off, fixed the pipe and cleaned up the mess,” Ashley said. “Most law officers have trades they do off duty, because the pay is not the best, so they do air conditioning, electrical work, carpeting, tile, plumbing.”

The clean-up took most of the day, leaving a yard full of towels and blankets drying. They even set up fans for the floor.

A 79-year old motorist was in distress and hadn’t realized he was speeding when he was pulled over.

“Everything is going wrong,” was all that David could say when he was asked to pull over for a speed limit violation.

Sterling Heights Police Officer Coats immediately surmised that the elderly motorist was having an exceptionally bad day, and decided to help him alleviate some of the stress, by giving David time to vent his frustrations.

David began telling Officer Coats about his wife being ill, along with caring for an adult “special-needs” son, and to make matters worst, a new TV he just purchased, and didn’t know how to hook up.

He confided to Officer Coats that he had been driving from store to store for the right cables for his TV, however was still unable to find the correct one.

“I really try to drive right,” he said. “I bought a new television today because I wanted to make my wife happy, you know, and I can’t get it hooked up.”

That’s when Officer Coats decided to call his three savvy tech police partners from his department to see if they could help out. Later that day the three off duty police officers arrived at David’s home to set up his TV… they even explained to him how to surf channels on his new TV! 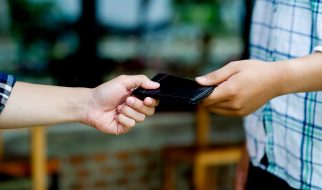