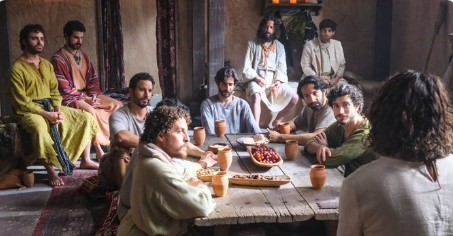 November 21, 2022 Kerri Faith
Note: This article may contain commentary or the author's opinion.

The third season of “The Chosen” is full of questions, hard times, pain, fear, and a strong desire to follow Jesus through it all.

The first two episodes of “The Chosen’s” third season, called “Homecoming” and “Two by Two,” came out in theaters on Friday. They will be shown for the next five days in more than 2,000 theaters around the world. The movie from Angel Studios is a dramatic story about the life and work of Jesus and his disciples. The first season came out in 2019, and the second season came out in 2021. Both were available to stream.

“The Chosen” season 3 episode 1 & 2 is outpacing several Hollywood movies at the box office this weekend, including Universal Pictures’ “She Said.” Stay tuned for my review on @DailySignal. pic.twitter.com/ybhrSpGDUj

The first season of “The Chosen” to come out in theaters was the most recent one, and judging by how well it did, it won’t be the last.

Box Office Mojo says that the two episodes made $3,484,674 on their first day, and Deadline says that they are well on their way to making an estimated $10 million during their first weekend. Friday ticket sales were just behind those of “The Menu,” a comedy horror thriller, but higher than those of “Black Adam” from Warner Brothers, “Ticket to Paradise” from Universal Pictures, and “She Said,” a movie about the #MeToo movement that just came out.

Neal Harmon, CEO of Angel Studios, said in a statement on Sunday that “The Chosen” is getting people all over the country excited about going to the movies. Harmon also said that “a strong showing is anticipated on Sunday night,” which will probably bring in more money than Friday.

The first season of “The Chosen” was completely crowd-funded. According to the show’s website, season one was the “highest crowd-funded entertainment project of all time.” More than 420 million people have watched episodes from the first two seasons.

In a recent podcast interview with The Daily Signal, “The Chosen” creator and director Dallas Jenkins said that filming season three was “the most challenging” thing he had ever done in his career. He tells the audience the same thing before the lights go down in the theater.

Jenkins said in a video introduction to episodes one and two, “It’s been a crawl to the finish line.”

After seeing the first episode of the season, though, the director’s stories about how hard it was to film during COVID-19, supply shortages, and bad weather make sense.

The most recent seasons of the show dive right into the struggles and hard questions that the disciples probably faced as they tried to follow Jesus. Even though some of the problems look different, most Christians still face the same problems, which gives the show five stars for being relatable.

Fans of “The Chosen” will remember that the second season ended with Jesus starting to preach the Sermon on the Mount, with his disciples looking on as thousands of people listened to him. The most recent season picks up right at this point, and viewers can see how the words, which can be found today in Matthew 5–7, pierce the disciples’ hearts by talking about their own sins and hurts. The way the disciples listen to their teacher and then act on what he says after the sermon shows that the show is just as much, if not more, about the people who follow Jesus than it is about the Messiah himself.

The insecurities and flaws of the disciples are used both to make the show funny and to give viewers a chance to see themselves in the pages of the Bible that the show brings to life.

Not for the first time, season three puts more of an emphasis on how human the disciples are.

Season 3 tries to answer the question, “WHY GOD?”

The disciples ask Jesus questions, and he answers them. He is with them as they struggle, but many of their problems still need to be solved.

Jenkins’ choice to show the truth about how hard it is to follow Jesus, along with the joy and love that comes with it, is both risky and refreshing. In season three, the director chose to ask questions that neither he nor the cast can fully answer, except with Christ’s invitation and promise in Matthew 11:28: “Come to me, all you who are tired and burdened, and I will give you rest.”

The new season of the show, which was mostly shot in Midlothian, Texas, about 25 miles south of Dallas, is just as good in terms of the stories it tells and how well it is made. The acting skills of Jonathan Roumie, who plays Jesus, Shahar Isaac, who plays Simon Peter, and Elizabeth Tabish, who plays Mary Magdalene, are a nice reminder that Christian television can be just as good as or even better than “The Lord of the Rings” or “Yellowstone.”

Through the “The Chosen” app, fans can watch the first two seasons of “The Chosen,” which has been translated into more than 50 languages, for free. Episodes 1 and 2 of the third season are being shown in some theaters until Thanksgiving.