July 28, 2022 Omar Faith
Note: This article may contain commentary or the author's opinion.

Few bonds are stronger than bonds between mothers and their sons, and this son went out of his way to show his mom just how much he supports and loves her after planning on a gift that took two years to accomplish.

Melanie Shaha of Gilbert, Arizona, and mother of six back in 2003 started having headaches which specialists later concluded that they were side effects of a benign brain tumor of the pituitary organ. The tiny organ located at the cerebrum base controls chemicals connected with developmental growth, digestion, and stress.

The mother’s tumor was the size of a plum and impacted the functioning of her pituitary organ, causing headaches that made it hard to think and comprehend at times.

“I had surgery to remove the tumor and I had a really great outcome,” she said.

Unfortunately, the growth returned, which required a second medical procedure in 2006 to try and eliminate it, followed by a third reoccurrence in 2017. Only this time radiation was recommended to her as a treatment.

As she weighed her options, she asked her doctor if she would end up losing her hair, and she was ensured that she didn’t have to worry about her hair. However, around three months after deciding to take the treatment to her surprise she found she began losing some of her hair every day.

“Not having hair, you stick out like a sore thumb and well-meaning people can say things that break your heart. I don’t mind being sick but I mind looking sick. I’d rather blend in and not stand out at the store,” she said.

Most, if not all, can feel for her and others like her. Most of us enjoy our hair, especially the ladies, it’s a part of who we are and gives us our unique look in whatever way we decide to style it.

Forward to 2018 Matt, her 27-year-old son was over at a get-together for the family and made a joke, “Why don’t I grow out my hair to make a wig for you?” Everyone took it as a joke and laughed it off. However, Matt was already letting his hair grow out, and that’s when he really began playing with the idea.

When March rolled around, he had grown his hair to 12 inches long, and that’s where he, along with some collaborators, headed to his mother’s house to chop it all off for good cause. While cutting his locks, the family was all “super pumped” and couldn’t believe what was going on. He had cut every inch of it off.

His hair was shipped off to a wig organization located in Newport Beach, California where it was weaved carefully by hand until a full wig was created, then shipped back to Melanie in June.

It should go without saying that Melanie loves her new wig and doesn’t leave the house without it. “The color is spectacular, and we had it cut and styled with a hairdresser,” she said. “Matt said it looks great on me.”

Melanie says that this is one gift that will be quite difficult for anyone to top as “It sure fills your emotional cup.” 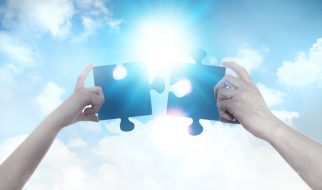