July 19, 2022 Omar Faith
Note: This article may contain commentary or the author's opinion.

We all have our favorite Christian songs that we listen to when working out or driving down the road, you might have it playing in the background while you clean or cook, and you might get extra excited when or if it comes on while on the radio or at church.

When that song comes on you can sometimes feel the anointing and power in the song. Sometimes you might be overfilled with His joy, and sometimes sing while bawling your eyes out. Most if not all of us Christians have felt His movement in this way, and that’s what Sofía Vergara got to experience when this Gospel singer sang this touching song.

The person who was able to reach into the worldly crowd at “America’s Got Talent” Tuesday night was Ben Waites, 32, who was brought into the world with Arthrogryposis Multiplex Congenital (AMC), which is a condition characterized by a generalized lack in newborn muscular development and growth.

However, this condition had no power or prevented him from using his voice and God from helping him to be gifted. The song he decided to sing was his own interpretation of “True Colors” by Cyndi Lauper – a melody he explained is tied to having faith and trust.

“The message of the song I feel can speak to people no matter their age, their race, their background. It’s able to communicate a message of hope,” he told the judges of the TV show, but he does even more than sing. This faithful brother is not only a Southern Gospel singer but also a vocal coach.

As his song carried throughout the stage and filled the room people can be seen cheering him on and awe-struck by his performance, but perhaps the one who was most impacted by his voice and maybe even the Holy Spirit was Vergara, who could be seen wiping away tears throughout his performance.

“Sophia is bawling her eyes out right now,” Klum said after Waites concluded.

Vergara wiping away her tears and trying to compose herself looked at Waites and said that the reason she was touched by his song was that it is a beautiful song and he made it his own, saying that it was different and unique.

Even Cowell who I didn’t even think was partaking in such shows anymore and known to be the harshest of judges on these TV series considered the presentation a “great audition.” Naturally, with such a good performance all three judges were in favor of sending Waites to the next round.

Now, I know some might look at this and say that Waites might be using his faith as a sort of crutch to make his way through the competition easily. However, he checks out because he said winning or losing doesn’t matter to him. His only focus is spreading Jesus’ love.

“What I’m more concerned about is appropriately and effectively showing the Gospel of Christ through this opportunity,” he said. “It’s very important that I get that message across.”

It’s awesome to see a brother in Christ marching into a worldly scene and spreading the love of Jesus. May his work be fruitful and go far. 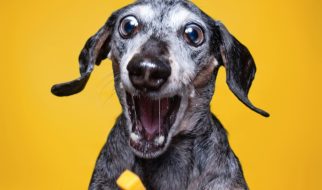